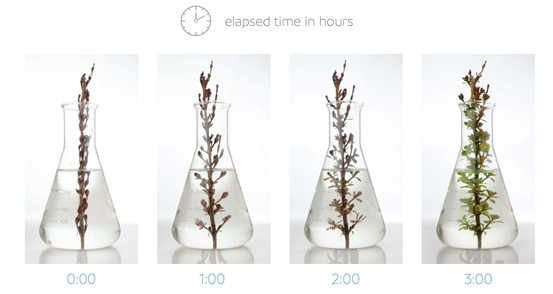 Myrothamnus Flabellifolia is found only in southern Africa. It is a woody shrub between 0.5m and 1.5m tall. Esse sources the plant from the Namib Desert, the oldest desert in the world, where it can be three years between rains.

Most plants die if they lose 20 – 30% of their water but Myrothmanus is able to completely air dry and then flourish when water is available. Myrothamnus can exist for years in this air-dried, dormant state. As soon as water is available, it can resume metabolic processes within a few hours, as seen above. Myrothamnus is called “uvukakwabafile” which translates to “wakes from the dead”. In traditional African folklore it is believed that the plants revival ability is passed on to the ill person receiving treatment and it is a symbol of hope. It has been used to treat a variety of illnesses, likely in part due to its ability to fight microbial pathogens. 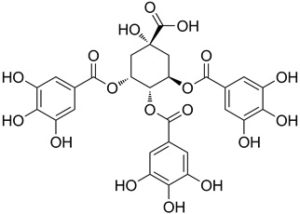 Up to 40% of the dry mass of the plant is made up of polyphenols (like 3,4,5-trigalloyl quinic acid above), giving the extract potent antioxidant activity. These compounds protect the plant from free radical damage while it is in the dormant state and it can do the same for your skin, protecting you from pollutants and other aggressors.

The extract is also capable of rapidly boosting skin moisture with an effect that lasts up to 24 hours.