Skip to content
Dashboard Module 7 – Microbiome Questions Answered Bacterial Population and Diversity What are the most common bacteria on my skin?

There are trillions of bacteria from hundreds of species in and on your skin.

As a rule, body site is the most important factor in determining which bacteria are dominant. In general, Propionibacterium acnes dominate oily sites and Staphylococcus and Corynebacterium species are more common in moist areas.

Although the most abundant species in an ecology are not necessarily keystone species, we should have a cursory look at the three dominant genera on skin.

Corynebacteria are rod-shaped bacteria. The species that grow on skin cannot produce their own lipids and are dependent on lipids from sebum. They are salt tolerant, so they can easily live in high-sweat regions of the skin and some species are, in fact, reliant on vitamins from sweat to survive.

Propionibacteria now referred to as Cutibacteria, are named for their ability to make Propionic Acid (a Short Chain Fatty Acid). They are mostly found in hair follicles but can also be found on the skin’s surface. They are specialised at acquiring nutrients from sebum and make many different lipases (enzymes that break down oil). Propionibacteria make free fatty acids that acidify and soften the skin. Propionibacteria also have proteases to liberate arginine from skin proteins and they use this as an energy source. The best-known species is Propionibacterium acnes and this one species makes up around 87% of the microbiome in both healthy and acne-prone pilosebaceous units. 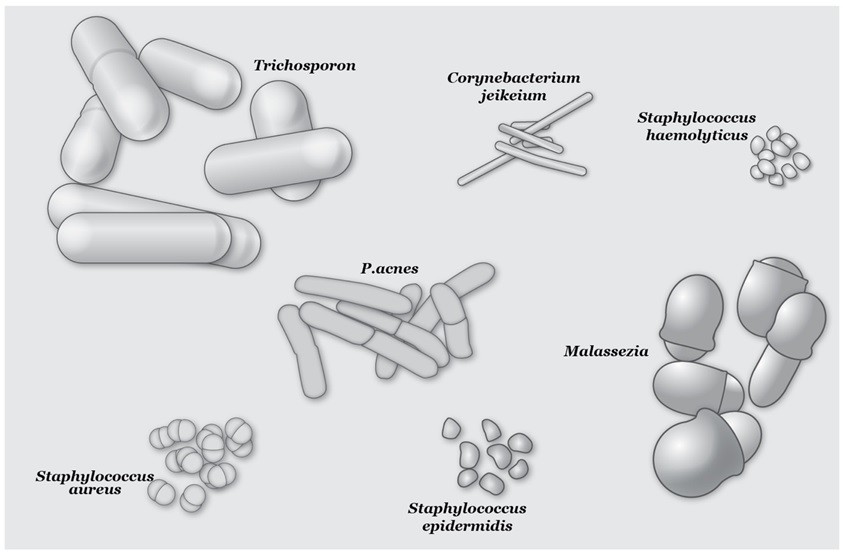 Staphylococci produce Lactic Acid, which is important to keep skin at a low pH. Staphylococci are highly adaptable and are found in both moist and dry areas of skin. Some species can survive in low oxygen habitats such as hair follicles. They are salt tolerant and may even use the urea present in sweat as an energy source. The most common skin commensal is Staphylococcus epidermidis. These bacteria produce adhesions that allow them to attach to skin cells and they secrete proteases that help remodel the stratum corneum and liberate additional nutrients. Some S. epidermidis strains can inactivate lipid bactericides secreted by sebaceous glands with an enzyme that turns them into cholesterol. Staphylococcus aureus is a pathogen that can cause a wide variety of skin conditions, including atopic dermatitis (AD), and is notorious for its ability to overcome the effect of antibiotics. S. epidermidis can inhibit biofilm formation and destroy existing biofilms of S. aureus, which is a close relative.

Lactobacillus are found everywhere in nature and is one of the first bacterial species that skin comes into contact with as we pass through the birth canal and into the world. Many of the live species and lysates used in Esse are from the lactobacillus family. They are keystone species in skin often calming and creating an ideal environment on skin to allow for the colonisation of other beneficial microbes.

Back to Lesson
Next Section